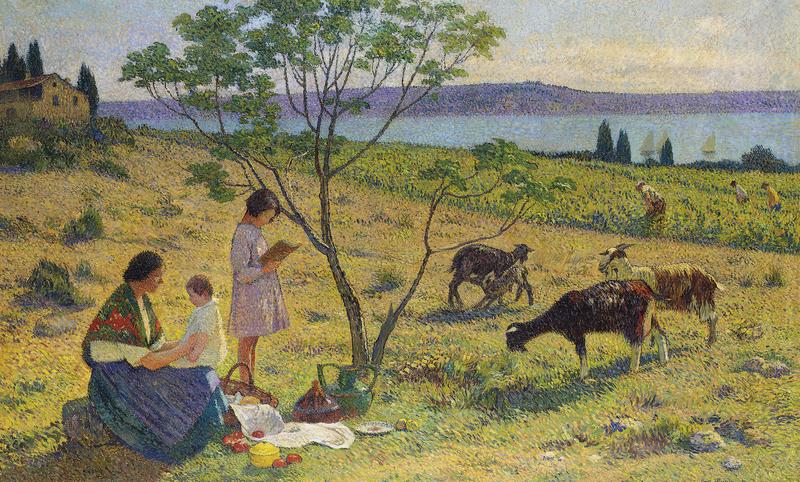 A native of Toulouse, Henri Martin’s roots in the South of France gave him an innate love of sun-drenched landscapes and a profound sense of man’s need to coexist harmoniously with nature. His paintings evoke the southern sun and have an other-worldly, dream-like atmosphere, often celebrating mankind embroiled in and at one with his surroundings. Martin studied at the Ecole des Beaux-Arts and received a grant enabling him to go to Paris to continue his studies. In 1885 he travelled to Italy where he observed the Italian Renaissance masters which had an intense effect on his work. The work of Giotto, in particular, with his tranquil, light-filled landscapes, helped Martin to distance himself from his academic training and develop his own style, with affinities to Symbolism. By the 1890s, he had moved towards a new way of painting clearly influenced by the Impressionists and the Neo-Impressionist pointillist technique. His fame during his lifetime came from the numerous murals he painted, which suggest classical components clearly impacted by the work of Puvis de Chavannes. His murals are visible all over France and in Paris, in the Hôtel de Ville, the Sorbonne, the Palais Royal and the Conseil d’Etat.

Martin painted Bucolique around 1932 and it is a masterpiece of tranquillity, harmony and balance in atmosphere, colour and structure. Martin, himself, felt at his most comfortable in a rural setting, producing his best works while he lived at his country estate, Marquayrol, overlooking La Bastide du Vert, near Cahors. In Bucolique, he captures the essence of the natural elements that combine to create and nuance the wine of the region. In four vertical canvases, he depicted the key seasonal occupations of wine growing: déchaussage des souches by labourers under the mild early spring sun in Le cultivateur; the sulphating of the vines traditionally carried out between Easter and Pentecost in Le sulfatage; September grape-picking in La cueillette; and Autumn harvesting in Les vendanges. Idylle and Bucolique, two horizontal paintings, accompanied the four canvases. In the paintings, Martin ennobles the workers, celebrates the timelessness of their labour and lends poetry to the ancient symbiosis of man and agriculture through harmonious compositions and a brilliant palette. The warmth of the Mediterranean sun radiates from the canvases, which are suffused with the golden light of the late summer, and the vegetation and soil of the Midi are evoked in vivid green and orange tones on a lusciously textured, impasto surface.

In Bucolique, Martin used small brushstrokes of colour interspersed with a lighter tone to convey the idea of a sun-filled scene. The strong outline of the tree and figures indicate a strong sunlight as do the colour-filled shadows. The painting is strangely reminiscent of Pre-Raphaelite landscapes in its bright colours and every stroke of paint seems to represent a blade of grass, a leaf or light dappling on the water. The group of mother and two children is balanced by the arrangement of a group of goats to the right. They are connected as the nanny goat feeds her kid, so the mother and children are provided with the produce of the land laid at their feet. Three men work in the middle distance – mimicked in number by the trio of conifers and the three sailing boats behind them. Man works in harmony with nature and reaps the rewards. All is harmony, all is bucolic in this pastoral idyll.