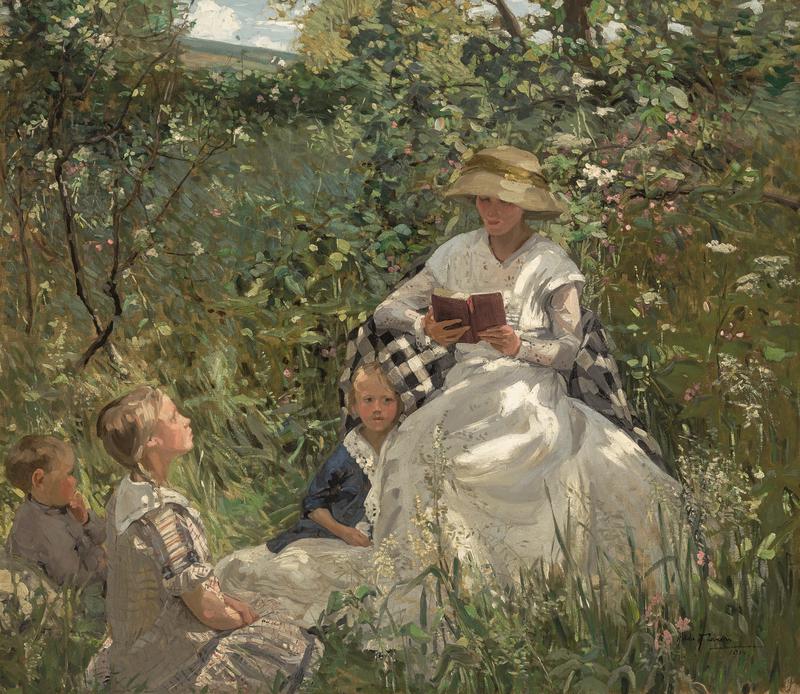 London, Royal Academy, 1914, no. 518
© Copyrighted Material - Express permission is required for use / duplication of this work.

Hilda Fearon was an important female member of the British Impressionist movement. Born in Banstead, Surrey in 1878, to a wealthy London wine merchant, she was the younger sister of the painter Annie (Fearon) Walke. Fearon studied with her sister at the Chelsea Art School and at the Slade School and shortly thereafter they moved to Dresden together to study under Robert Sterl. They both then moved to Cornwall, where Fearon gained her most significant training with Algernon Talmage in St Ives from 1900, where many female painters of her day were drawn to paint. Talmage had moved to the Cornish town in 1888 and began to paint there with Julius Olsson and several other notable painters. Nearby Newlyn had become home to a celebrated school of British impressionist painters. By 1900, when Fearon arrived, Talmage and Olsson had established their own Cornish School of Landscape, Figure and Sea Painting. Talmage in particular exalted in the light of the Cornish peninsula and his influence can be seen in Fearon’s style. It is known that Fearon and her fellow student, Emily Carr, would hire local fisherfolk and children to sketch in the evening and on bad weather days. It would seem that Fearon and Talmage, seven years her senior, might have had a romantic liaison, for in 1907, just as more painters, including Harold and Laura Knight, were moving to Cornwall, the two of them moved back to London together.

Fearon was a member of the Royal Institute of Painters and her works were exhibited in all of the major modern art venues in London in the years leading up to and during the First World War. She participated in the 1910 Summer Exhibition at the Royal Academy, which was a seminal exhibition for the British Impressionists. Her works were also exhibited in Paris (where she received an Honourable Mention at the Salon in 1913), Glasgow, Dublin, Venice and Pittsburgh. In 1913 she exhibited at the Summer Exhibition where one-third of the exhibits were by female artists. The critic, Frank Rutter, described that year’s show as evidence of ‘triumphant feminism’, describing the contributions of the female artists as far bolder than those of the new young male artists at the Exhibition.

In her paintings, Fearon predominantly depicted middle class women and children in domestic interiors or engaging in leisurely activities out of doors. This typifies the taste for understated domestic genre scenes prevalent in popular British painting preceding the First World War. Later this was termed the ‘golden age’ and now seen as a poignant and nostalgic time, presaging the horror to come. The present work was exhibited at the Royal Academy in 1914. It is a charming, tender scene illuminated by soft afternoon light. In a 1914 article on the artist published in The International Studio magazine, of the present work it is said, ‘The picture is in the key of silver, and between the girl reader and the listening children there are threads of attention, so that the meaning of the title is perfectly expressed.’ The ethereal beauty and light skilfully rendered in Enchantment becomes all the more touching knowing that it was painted at the start of the First World War. It represents an idealised way of life, emblematic of the beauty and peace of the English countryside, here captured in a small family group (perhaps symbolically without father). The mother reads steadfastly to her children: a plump, rosy-cheeked baby sits opposite her and her middle daughter nestles into her mother’s side; the eldest girl sits with ramrod straight back, her blonde head raised and lit by a shaft of light directly above her from the blue sky. She perhaps becomes a symbol of the upright, resilience and determination of the British people; the epitome of a tranquil world and a way of life under threat.

Tragically Fearon herself died prematurely at the age of only thirty-nine in 1917 and Talmage later presented her painting, The Tea Party, painted in the year before her death to the Tate Gallery.