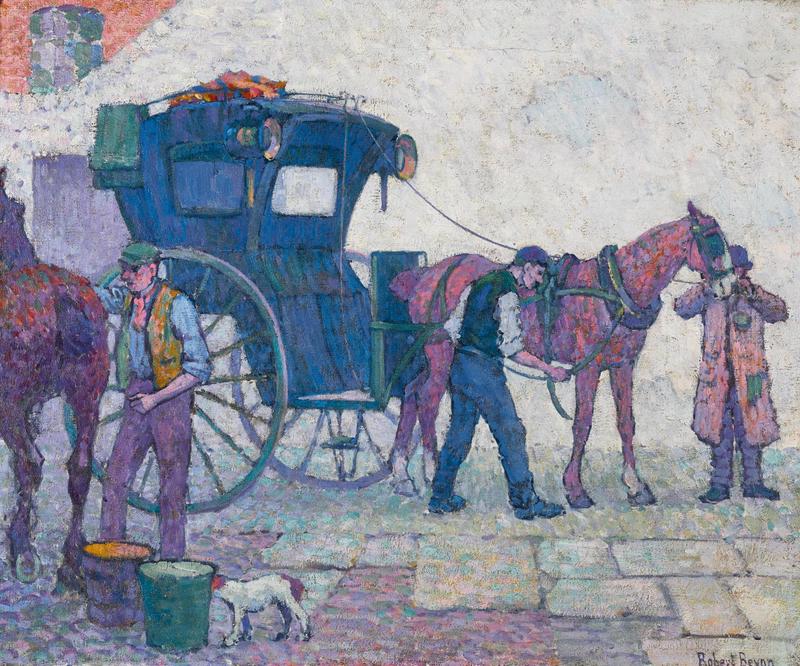 The Hansom Cab is a particularly refined example of Bevan’s urban horse paintings. Owned by family friends of Bevan since first purchase, and not seen in public for nearly seventy years, it demonstrates Bevan’s first-hand knowledge of the French avant-garde through his close contact with the Pont-Aven School in Brittany. Bevan had been allowed to give up the family banking business to study art in London and Paris and he spent time in Pont-Aven in the early 1890s. His work demonstrates his loyalty to the principles of Gauguin whom he met and befriended in 1894 and who gave him several prints. There is no evidence that he had ever met Van Gogh but it is obvious in the swirling trees and landscape of his Breton drawings that he knew his work. Bevan met Cézanne and received encouragement from Renoir, particularly in his drawing of horses.

In his early days, Bevan’s independent wealth gave him time to develop his talent slowly, and to travel widely. From Pont-Aven, he went to Tangier where he became master of the hunt and continuing his life-long love of horses seems to have spent most of his time riding rather than painting. ‘Contemporaries of his youth told us that he was a good and bold horseman’, his son wrote. ‘And though he could not afford to hunt after his marriage, and very seldom rode in England, he continued to study horses not only as types but often as individuals with love and understanding.’ In the summer of 1897 Bevan met the Polish painter Stanislawa de Karlowska and they married in Warsaw.

In 1900, Bevan and his family moved to a large house at 14 Adamson Road, in the Swiss Cottage area of London. Although he abandoned the paintings and lithographs of hunting scenes, he still drew inspiration for subjects from the countryside. He formed the habit of spending the summer on painting trips to various rural locations such as a cottage in Kingston near Lewes, Sussex or with his wife’s family. The summers of 1901, 1903 and 1904 were spent on Bevan’s father-in-law’s estate at Szeliwy, Poland, in Russian occupied territory, where the Karlowski family were substantial and industrious farmers and passionate patriots. Bevan felt an intense affection for them and their country; feelings similar to those he had had for the people of Brittany and his studies of local peasant life show a simplicity akin to life in Pont-Aven. It was here that some of his most colourful work was produced. The influence of Gauguin was key in Bevan’s development, helping him to discover pure, rich colour and broad brushwork which led him to an innovative ‘premature’ Fauvism in 1904, a year before the Fauves' exhibition at the Salon d’Automne in Paris and several years before Roger Fry’s two exhibitions of Post-Impressionist art. His work at this time reflected his first-hand experience with recent French art during his travels on the continent and his oil paintings and watercolours of agricultural scenes of the South Downs or Poland provided motifs with which to explore his concerns with the effects of light and the use of colour.

Spencer Gore and Harold Gilman invited Bevan to join the Fitzroy Street Group. This was an important development for Bevan and for the first time since his days in Pont-Aven, and now at the age of forty-three, he was part of a group of painters with shared interests. Bevan was over ten years older than Gore, Gilman and Charles Ginner, of a similar age to Sickert and Lucien Pissarro and like the two older painters, he brought first-hand knowledge of modern French art to the group, having been one of the few Englishmen to have personally known and worked with Gauguin. Perhaps more fundamentally, he was also given an opportunity to sell his work, and for it to be seen by important collectors and critics of contemporary British art.

Bevan seems to have quickly taken up a distinct position at Fitzroy Street. His friend Walter Bayes recalled that: ‘Bevan was rather the Mæcenas of the group whose subscription was always paid to date, and he was, I fancy, sometimes a help in time of trouble. His gruff voice and appearance of a fox-hunting squire was rather refreshing at Fitzroy Street, where some (of the visitors rather than the members) tended to be ‘arty." Marjorie Lilly gave a flavour of Bevan’s personality at Fitzroy Street, recalling that: ‘He used to take up his stances at our parties by the chimney piece, having arranged his glass of beer and smoking apparatus on the shelf with deliberation. From this advantageous position he could observe in the looking glass before him every newcomer who entered the door. Bevan was no equalitarian, and Fitzroy Street at this time was full of gate-crashers who descended like locusts … to consume as much as possible of the food and drink … he subjected each guest to a prolonged glare, to assure himself that they were presentable. Sometimes, when he was doubtful of their respectability, he would question us loudly about them in his own peculiar brand of Anglo-French, much to their joy if they happened to understand him.’ (Marjorie Lilly, Sickert: The Painter and his Circle, London 1971, p.102).

Bevan was a founder member of the short-lived but influential Camden Town Group, formed in 1911, with Spencer Gore, Harold Gilman, Walter Sickert and Charles Ginner; soon to be joined by Wyndham Lewis, Lucien Pissarro, Augustus John and Maxwell Gordon Lightfoot. This diverse group of talented artists together contributed to the foundation of the Modern Movement in Britain. The purpose of the society was to enable artists to show and sell their work, by-passing the dealers. In the event, the group held only three exhibitions, in June and December 1911 and December 1912. In 1913 its existence was replaced by the London Group which Bevan also co-founded.

At the time The Hansom Cab was painted, Bevan had moved into a mature style. The well-honed understanding of light and colour is combined with a carefully planned organisation of space and close observation, reflecting Bevan’s keen interest in the routine interaction of cabman, yard lad, client and horse, all distinguished by their different clothing. This is a scene from working-class life and Bevan made studies for his cab-yard paintings at the cab-yard in Ormonde Terrace, London NW8, overlooking Primrose Hill, and just a few minutes’ walk from his house. The extent to which Bevan’s cab-yards of London have become a subject with which he is so strongly identified, is testament to the appeal these works have, both as fine examples of modern British painting and evocations of a past era of the city. Bevan was painting his cab-horse pictures at a time of rapid transition, when the traditional horse-drawn cab was being replaced by the motorised cab and horses were disappearing from the city landscape.

Frank Rutter highlighted the historical importance of Bevan’s paintings when they were first shown in the Camden Town Group exhibition in 1911, writing under the subheading ‘The Vanishing Cab Horse’: ‘I would commend to the notice of this society the works of Mr. R. P. Bevan, who is one of the hardest of the group to place by reason of his strong individuality. His decoratively conceived and shrewdly observed paintings of the vanishing cab-horse in the street and stable are in some respects the most remarkable pictures in a remarkable exhibition. To their great and obvious artistic merits they have added a genuine historic interest, and they are precious documents of rapidly disappearing phases of London life’ (Frank Rutter, ‘Round the Galleries’, Sunday Times, 25 June 1911, p.5).