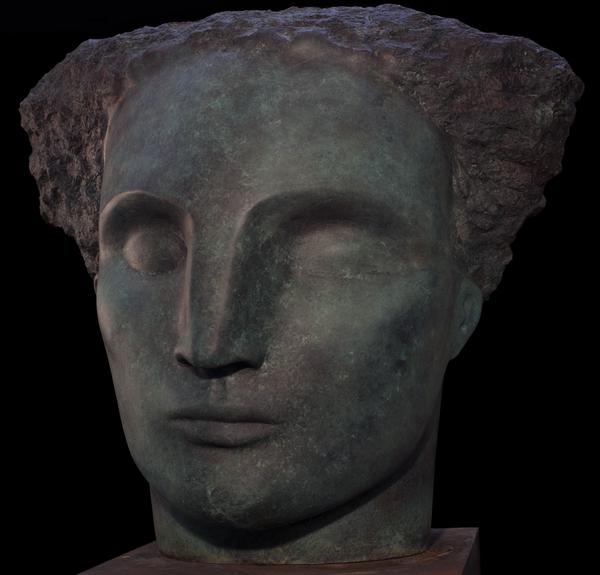 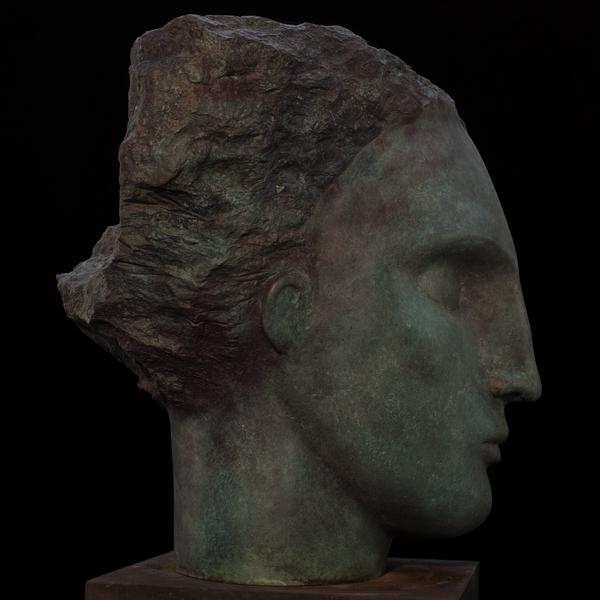 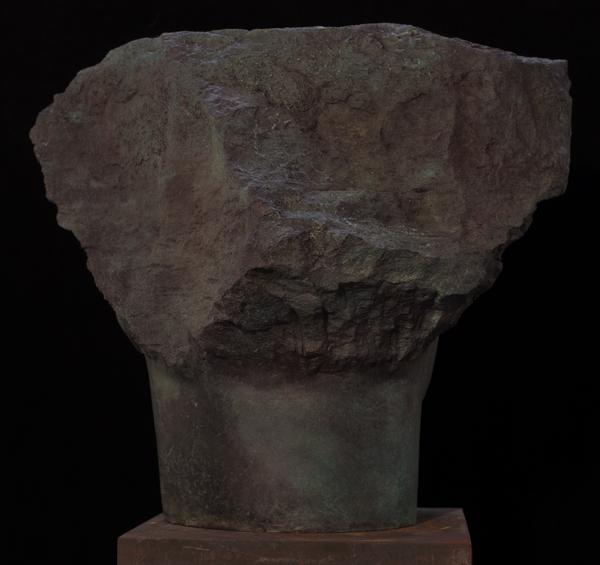 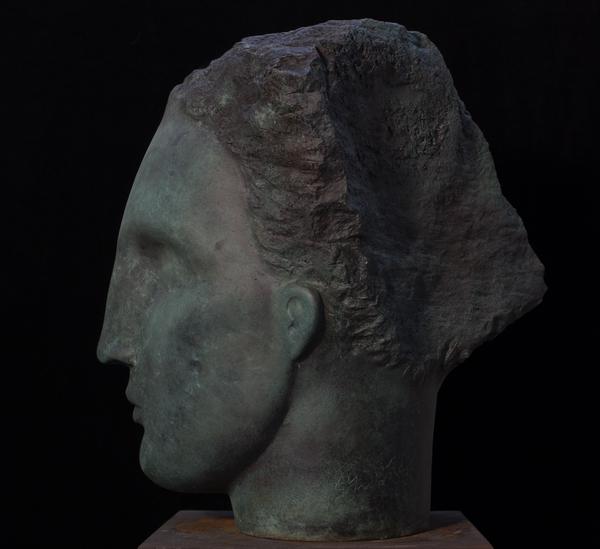 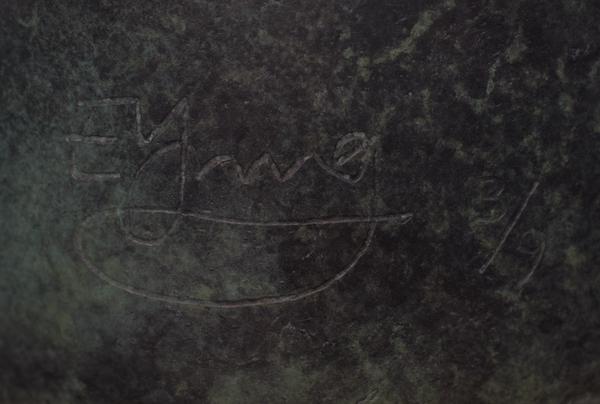 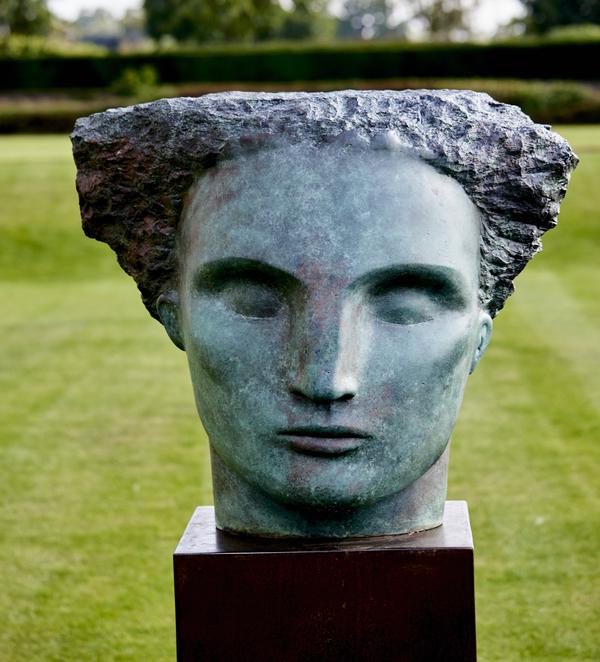 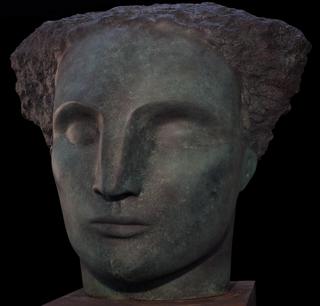 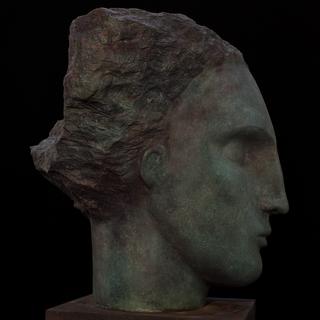 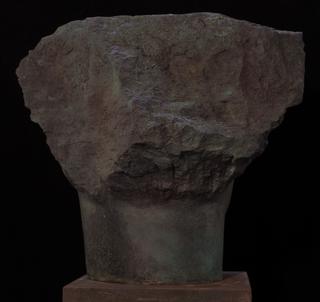 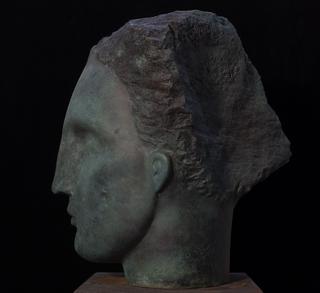 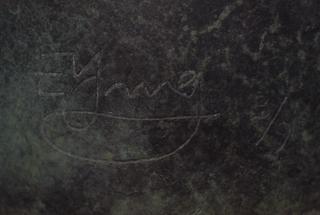 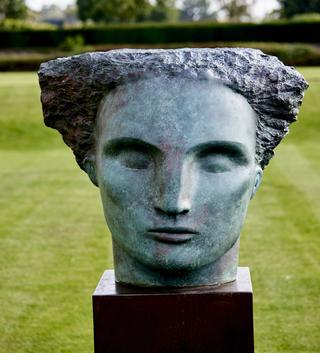 A sacerdotal stillness is quintessential to Young’s work and is embodied in Face of Stillness which has the meditative qualities of a monumental bodhisattva or Buddha. The graceful face is compelling, with closed eyes and timeless and nationless features. Young deliberately creates non-culturally specific heads: ‘I try to get rid of all the emotional content to achieve a sense of complete stillness. When I begin carving, the face might seem a little worried or a little happy. I want to get rid of all that. I want it to be utterly still. I want to create a feeling of silence… The face is quiet, and the eyes are shut because I want the viewer to have a moment to respond to the stone, to understand quietness in the stone, even though it may have been created in volcanoes and earthquakes.’

Acknowledging that there are artworks that have slipped into her subconscious, Young attempts to create ‘a look that anybody who has lived anywhere at any time on earth will recognise – two eyes, a nose… I want to do something that anybody will get and will show the nature and the material, wild and free.’ Louis de Bernieres described Young’s work as ‘characterised by the highly individual way in which it combines strength with gentleness. Her sculptures are massive, often chthonic, but their contours are rounded as if moulded by a lover’s hand rather than chiselled out by steel.’

Young invites the viewer to connect with the sculpture, contemplating it as an experience of self-reflection which, as with religious sculpture over the centuries, encourages rapport, compassion, a meditation on the self and mankind’s relationship with the earth. The material acts as a timeless connection with the land, and a historical witness which Young sees as a plea for a reimagining of our future. She describes her sculptures as ‘fictional archaeology’ – not belonging to a particular period but offering a timeless connection to the ground.

Young has chosen to cast a few specific works in bronze which she considers to be exceptional examples of the various genres of her work. She states, ‘Bronze is one of the most ancient and beautiful materials, used over many millennia by humans. Like stone, it is extremely durable, and can carry the embodiment of human consciousness in sculpture over vast periods of time.' The bronzes are not mere replications of her iconic stone heads but rather entirely new works of art, marrying her contemporary carving style with traditional casting. They have an enduring, romantic presence and bear distinct patination. Face of Stillness is patinated in a rich, mottled green suggestive of an aged and timeless sculpture that has taken on the viridescence of its surroundings, offering meditations on time, geography, humanity and culture.

Young lived a bohemian early life as a teenager in 1960s London and was the inspiration for Pink Floyd’s song See Emily Play. She travelled in Afghanistan, Pakistan, India and Iran as a young woman and her experiences were instrumental in shaping her work. Escaping from what she saw as the stifling world of the London artworld at Chelsea School of Art, where figural work was eschewed, she was awed by the ‘wild nature and unparalleled freedom of the landscape’, seeing it as biblical, beautiful, tough and untouched. She saw art in the very landscape and felt a connection with stonework which she sees as an ancient continuum following a tradition executed by mankind for millennia, and as a process honouring ‘nature and history’. Under her guidance, faces emerge from stone, handsome, with aquiline noses and high, wide, straight foreheads each imbued with their own identity as determined by the stone’s geological history and geographical source as her imagination. She leaves ragged sections of rock, allowing natural stone to speak to us as loudly as her own hand.

Young collaborates and connects with her material, choosing a variety of stones, often with inclusions which other sculptors might see as impure or too unpredictable and problematic. In this way, she works with the natural geological process created over millions of years and the natural beauty of the stone, delighting in its faults, veins, splits and idiosyncratic form. The result is a juxtaposition between polished stone and natural form. Young has been described as ‘Britain’s greatest living stone sculptor’ (Jackie Wullschlager, The Financial Times) and she believes, ‘There is a story told in every piece of stone that is more magnificent than any creation myth.’ Each sculpture ‘holds some of the history of the globe, formed of the very same original material that I am formed of – a process begun billions and billions of years ago in the origins of our universe… I carve the stone into familiar forms, carrying with them an emotional charge; the forms are beautiful, the stone broken. The expressions of sadness, of reflection, are easy to read – I like to think that anyone who ever lived on Earth, anywhere, any-when, would recognise these form.’

Young’s sculptures have the hieratic stillness and beauty of a Khmer Boddhisatva head, or Buddha and their grandeur and monumentalism evoke the work of early Greek sculpture and the expressiveness of Michelangelo, Rodin or Moore. Indeed, Young’s grandmother Kathleen Bruce, widow of the Antarctic explorer Captain Scott, was a sculptor and a friend of Rodin. Young grew up wandering around the ancient stone circles of Avebury and Stonehenge.

The Etruscan hills form the backdrop to Young’s graceful, reverential sculpture as she now divides her time between London and her studio at the Convento di Santa Croce, in Tuscany. Young’s work is sought after at home and internationally. She was commissioned to sculpt eight ‘stone angels’ for Salisbury Cathedral’s 750th anniversary in 2008. In 2013 she exhibited (We Are Stone’s Children) at the 56th Venice Art Biennale which featured monumental human heads, carved in a range of colourful stone such as Dolomitic limestone, onyx, quartzite, igneous rock and lapis lazuli, which evocative titles such as Lost Mountain Head, Dark Forest Head and Earth Song. Some of her permanent installations can be seen at St Paul’s Cathedral (Five Stone Angels) and other angels are installed at St Pancras New Church, Euston and the University of Notre Dame (USA), London; Lunar Disc 1 was commissioned by Loyola University Chicago. Young is an active conservationist and environmentalist and uses ancient materials to ‘tell the story of the Earth’. Recently she has been engaged on a five-year project to prevent illegal trawling at Talamone in Tuscany, creating an underwater sculpture museum of Sea Guardians – utilising beauty and art to solve the problem of illegal industrial fishing.