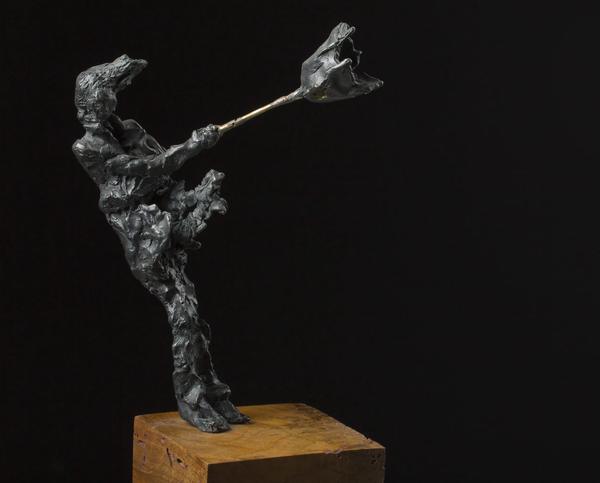 The Day the Wind Stopped

Triggs encompasses in this work a powerful combination of mass and movement, defying gravity in a depiction of a figure at the moment caught by a fierce gust of wind. We can see and feel its force as it billows through the fabric of their coat, swirling up their legs and whipping the hair as they desperately cling to their umbrella which in turn has been torn inside out. The figure seems to spiral, almost losing their footing, knocked backwards by the ferocity of the gale as they franticly try to keep upright against the natural elements.

As with much of Triggs’ work there is an ambiguous twist evident in the title, The Day the Wind Stopped. Triggs here seems to be commenting on the very question which has preoccupied sculptors though the ages: how you depict movement in a sculpture which by its very nature is solid. As Rodin said: ‘We must unfreeze sculpture … Life is the thing; everything is in it, and life is movement’. Triggs responds to the challenge through careful compositional decisions: the face stares at an angle perpendicular to the chest, while the legs make another turn, as if there is a kind of “S-bend” running through the work. The working of the bronze is also crucial to its inherent dynamism: the metal has been pressed and textured, with crevasses and folds, suggesting the rippling effects of wind. The feelings of movement are intensified by the backward-leaning posture of the body, and the forward-pulling force of the umbrella, held by such a thin spindle of bronze that it really seems as if the work might collapse. Triggs has shown in his mastery and manipulation of the material, how the still and heavy medium of bronze can create powerfully convincing senses of movement and fragility.