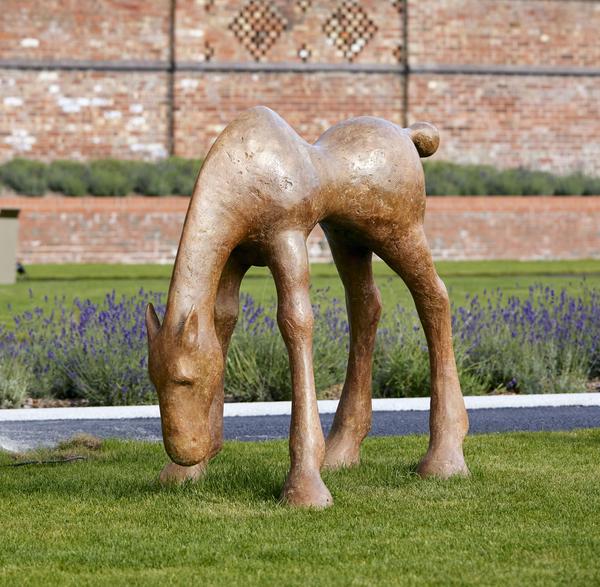 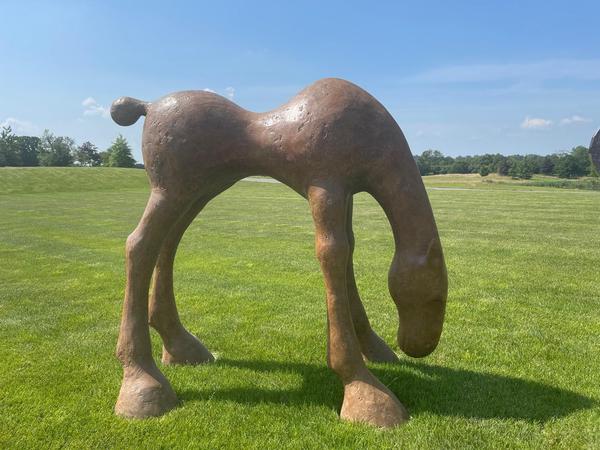 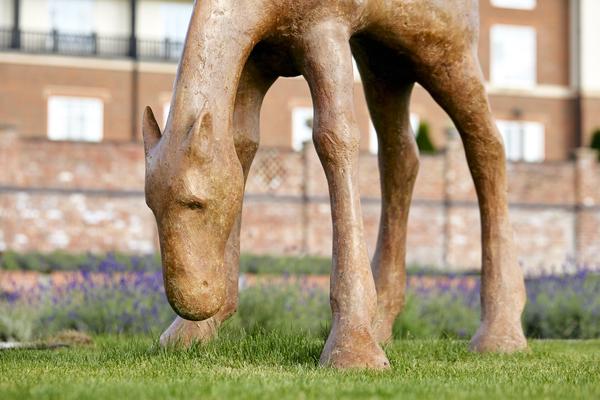 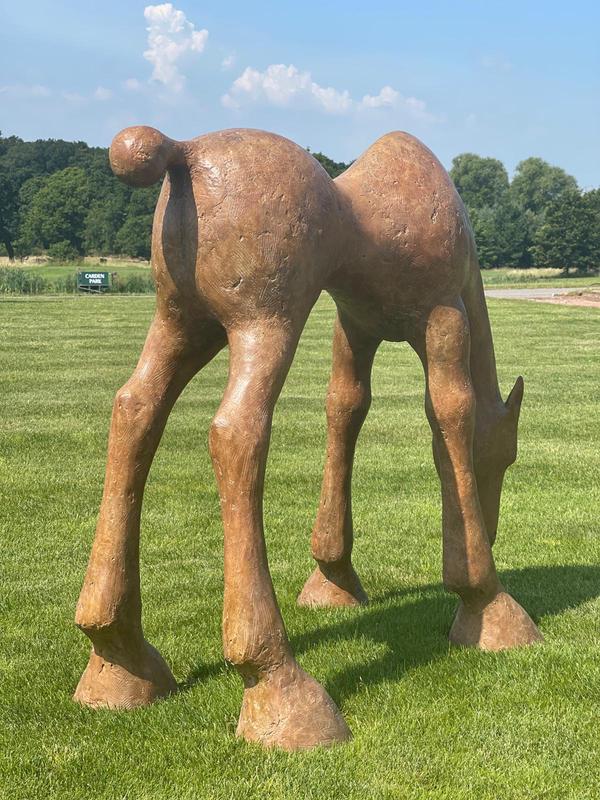 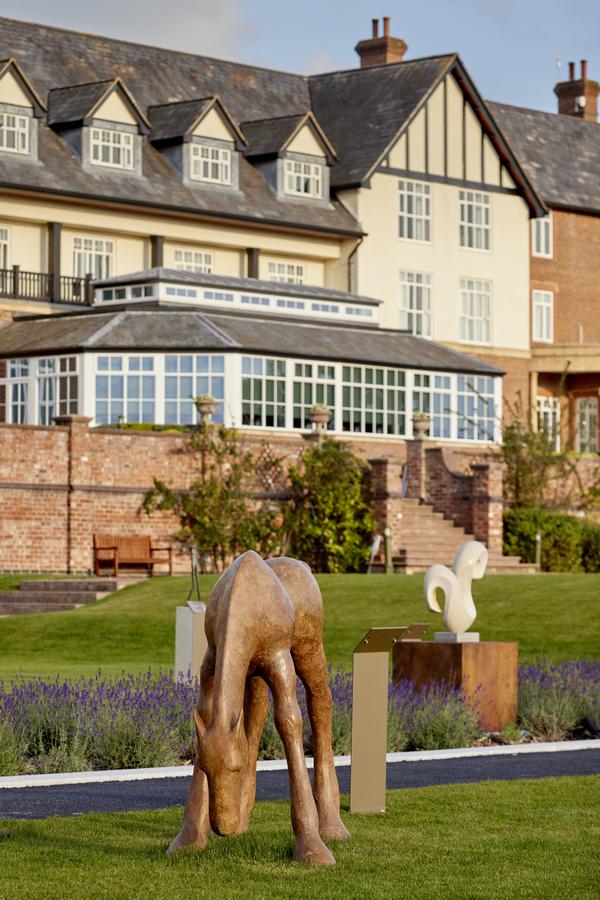 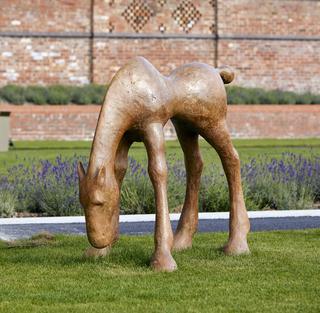 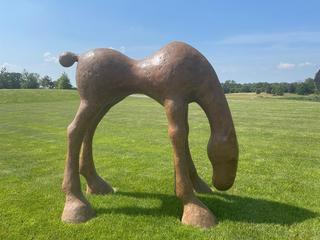 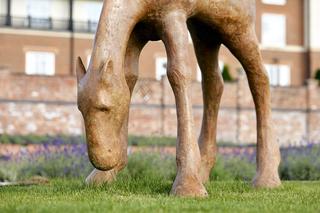 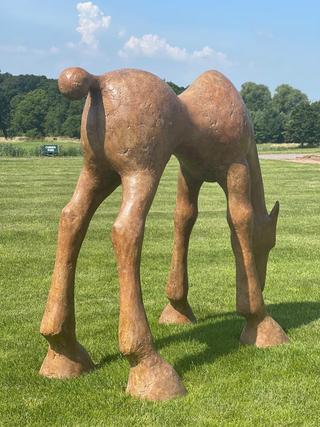 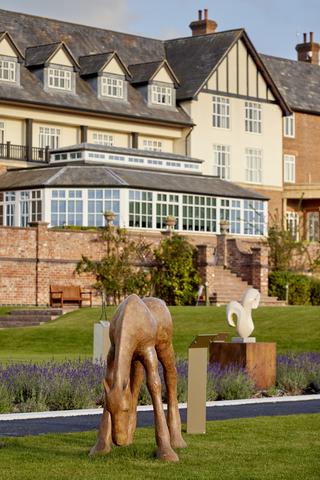 In Étaín we feel the tentative movements of a shaky, new-born foal, bending forward for perhaps her first taste of grass. Her too-big-for-her hooves are planted firmly on the earth, balancing and steadying her. Her front gangly legs, too long for her body but sturdy, seem to contain her new-born skittish, but slightly unsure energy and they are spread, allowing her to support herself; her ears stretch backwards as she uncertainly leans forward. Her body configures the sinuous, serpentine line enhanced by the elegant arc of her neck suggesting the natural grace and dignity of the creature and the distinction to come.

In the patina we see the colours of Scott’s landscape: rich moss greens and autumnal colours of the trees and earth. The colours animate, centre and connect Étaín to her surroundings. Slight pitting and scoring creates the brindle effect of her coat and picks out the russet flecks, suggestive of a timeless sculpture, already weathered. A foal new to the world but who has been here forever. Her softness and gentleness bely the quality of the bronze itself.

The story of Étaín comes from one of the richest stories of Irish myth, The Táin. The powerful Midir of the Tuatha Dé Danann falls in love with the most beautiful Étaín - ‘Lovely anyone until Étaín, Beautiful anyone until Étaín’ (Jeffrey Gantz, Early Irish Myths and Sagas, 1981, p. 45). Midir’s rejected first wife, Fúamnach, is jealous and casts a spell that transforms Étaín into a butterfly. In this bewitched form Étaín has many adventures before being reborn several centuries later. Étaín is linked with horse deities and Scott has in his sculpture interpreted her reborn as a beautiful foal. In his reading of the story, Scott had ‘always envisaged the horses as feminine…we had draught (masculine) horses on the farm, and I’d had experience of the birthing of a foal. In the story, with the first gulp of air when she is born, Étaín becomes ‘a vapour of the mind’, and being fully emancipated, is able to stand up on her own’. For Scott, the femininity resides in ‘the long, elegant line of the horse’.

Anthony Scott was born in rural County Fermanagh in 1968. From a farming background, he was surrounded by horses, dogs and bulls which often feature in his work. Feeling a close affinity with them and the land, Scott incorporates inspiration from animals and his Irish roots. He believes that animals ‘possess a sense of timelessness, unaffected by changing fashions. They’ve appeared in art from the earliest cave paintings – I like to think I’m continuing this tradition.’ Similarly inspired by the Celtic myths and literature that he absorbed as a boy and assimilated into his imagination and his understanding of himself and his native land, Scott’s aim is to create timeless sculpture that ‘in a hundred years from now still has … resonance and, to paraphrase Picasso, to make art that washes from the soul the dust of everyday life.’ (Irish Arts Review).

Scott’s sculptures of animals are imbued with human characteristics so that an emotional, immediately compelling, connection between the sculpture and the viewer occurs. The sculptures have ‘a soul’ and a vitality that belie the material from which they are made. These anthropomorphic elements are coupled with traits or an essence of the animal itself - an expression or stance - so that attributes are immediately evident: the strength and vigour of a bull or the softness of a foal. Animals play central roles in Celtic myths and often shape-shift from human form to animal or bird form. Scott views his sculptures from the perspective of the animal, rather than the human and the spirit of the heroic romance of the sagas is pervasive. ‘The Celts believed that the spirit world of animals often impinged on and influenced the human world and I have tried to convey this feeling in my work.’

Scott has exhibited extensively in Ireland, the UK and at numerous international art fairs. In 2011, the Queen unveiled his sculpture See the Stars at the Irish National Stud in Kildare. His work is included in the public collections of the Arts Council of Northern Ireland; the Barbican Centre, London; the Crafts Council of Ireland; and the US Ambassador’s Residence in Phoenix Park, Dublin; and is held in numerous important private collections including, Basil Blackshaw, Daniel Day Lewis, Dame Judi Dench, Lord and Lady Glentoran, Brian Keenan and Barry McGuigan.