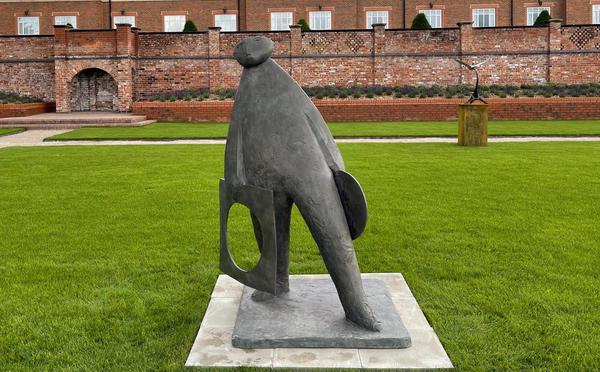 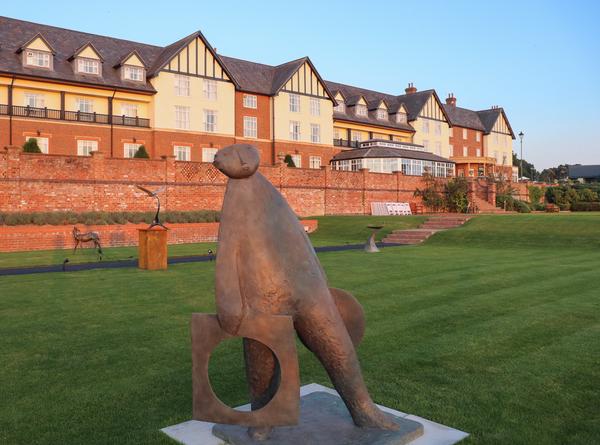 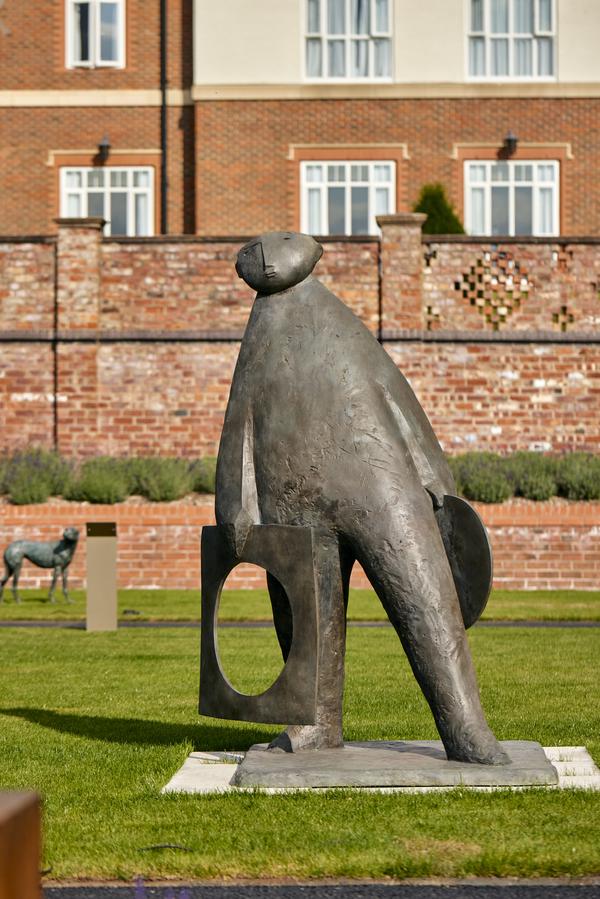 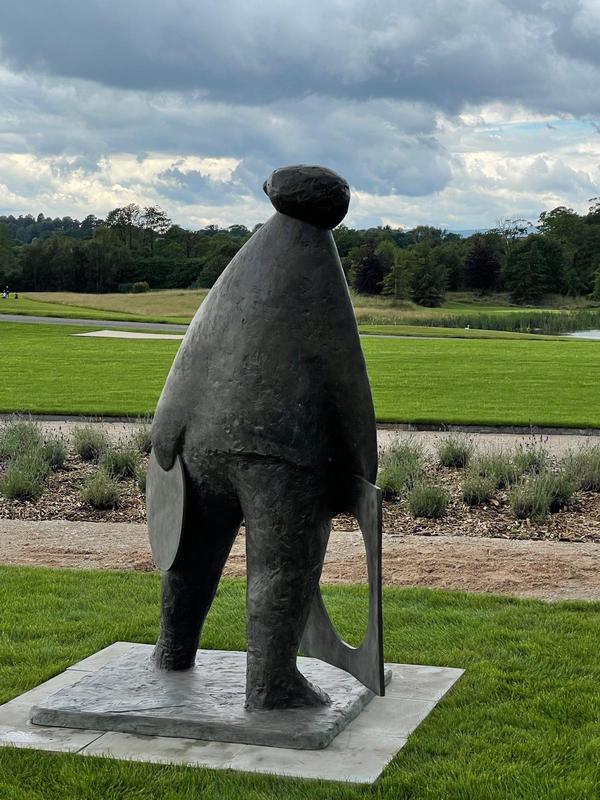 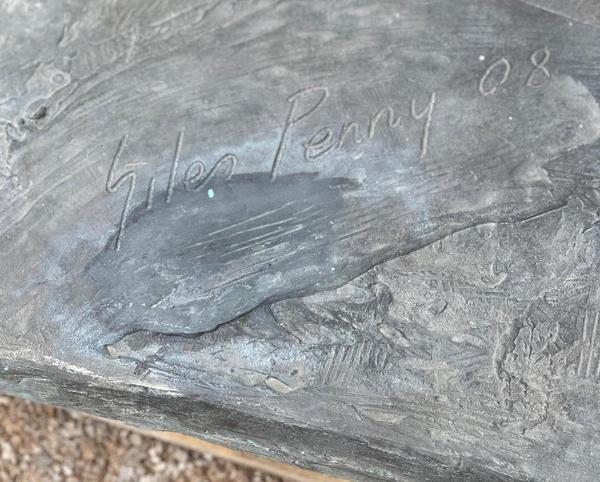 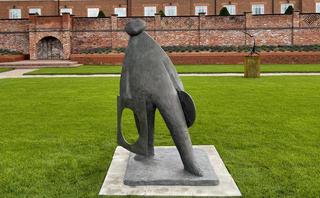 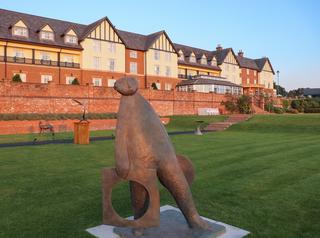 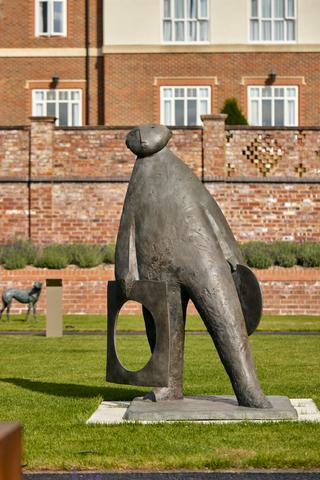 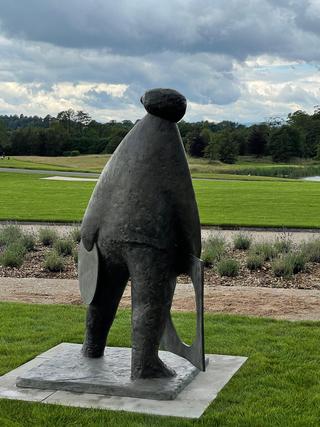 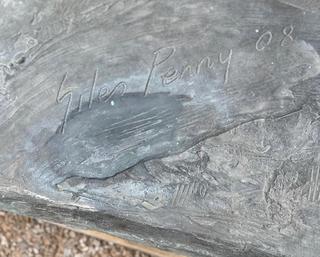 Man with Both Pieces

Giles Penny’s representation of the human form makes his sculptures instantly recognisable, whether presented as monumental bronzes or as maquettes. Following in the classical figurative tradition, Penny’s concern is not with true representation; rather, he uses the human form as a vehicle to ‘explore the interaction between physical and abstract worlds’ finding inspiration from observing people and things around him and ‘how things and people are interconnected' (Penny 2017). His figures are pared down to their essential forms, yet there is solidity and mass to their presence and they retain a rich, if terse, expressive character.

Man with Both Pieces combines these attributes: Penny describes this figure as ‘the creator, artist, architect, an Avatar, a god who appears on earth as a person, seeking to impart divine Knowledge’ (Penny 2021). Standing at just over a metre high, there is a sense of weight and responsibility in the figure’s posture, lending the work a monumental and timeless presence. The small ovular head with serene features perches on the weighty body, yet a far-seeing gaze commands the surrounding space. The sloping shoulders melt into the single organic form; there is mass and weight to the torso from which thickset arms hang while solid legs root the form to the ground. All extraneous detail has been cut away from the man’s clothing to his knees, elbows, hands and feet, with only the exaggerated proportions of the shapes suggesting their presence. Despite the form’s solidity, the figure’s contrapposto stance evokes potential for movement, heightened by the play of light on textured areas of cool grey patinated bronze.

The figure holds in his right hand a square form with an excised circle and in the left the cut-out circle. The hard geometric lines of these two-dimensional shapes contrast with the torso’s organic softness. Penny explains: ‘He holds the circle which he has cut out from the square, he also has the square from where the circle was cut, therefore he has both pieces. The circle represents a unity of all things, the hole where the circle was, represents the potential unity of all things’ (Penny 2021). These are the figure’s instruments by which he can impart divine knowledge: while the circle stands for unity, the square, with its sharp corners and defined limits, may stand for the opposite, creating a sense of the figure’s quest to find unity. Moreover, the shapes come freighted with the iconography of the Renaissance, where circular forms symbolise the eternal and divine, while square, rectilinear designs represent the human and the limits of mortal life. The weighty burden of the shapes is evident through the figure’s roughly delineated hands which barely seem to hold the shapes in place, whilst his arms and shoulders seem to droop under their weight. However, through the counteracting weight, poise and balance of the figure, there is the resilience and permanence of human spirit which exude from this work, dominating the space it inhabits with a quiet, determined positivity.

Born in 1962, Giles Penny trained at The Heatherly School of Fine Art, London; Bournemouth & Poole College of Art and Design and Newport College of Art. Penny was artist in residence for The Body Shop in the mid 1990s. In 2017 he was elected as an Academician to the Royal West of England Academy.

Penny trained in painting and printmaking as well as sculpture. His instantly recognisable works focus on the human form, which he simplifies and abstracts, creating characterful yet elusive figures as he explores the interaction between physical and abstract worlds. His popularity is far reaching: Felicity Green, the British fashion journalist chose his sculpture as her luxury item on Desert Island Discs.

Penny has exhibited widely in the UK. His large-scale sculptures can been seen in many public collections including Rise and Shine commissioned for the BBC in 2009; Two Men on a Bench at Canary Wharf and Man and Arch at Fulham Reach. Further examples can be found at Lyminster Church, Sussex; Wolverhampton City Centre; Portishead Quays, Bristol and Bruton, Somerset.