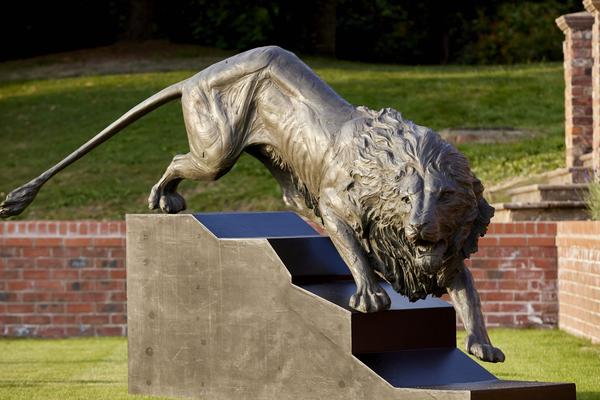 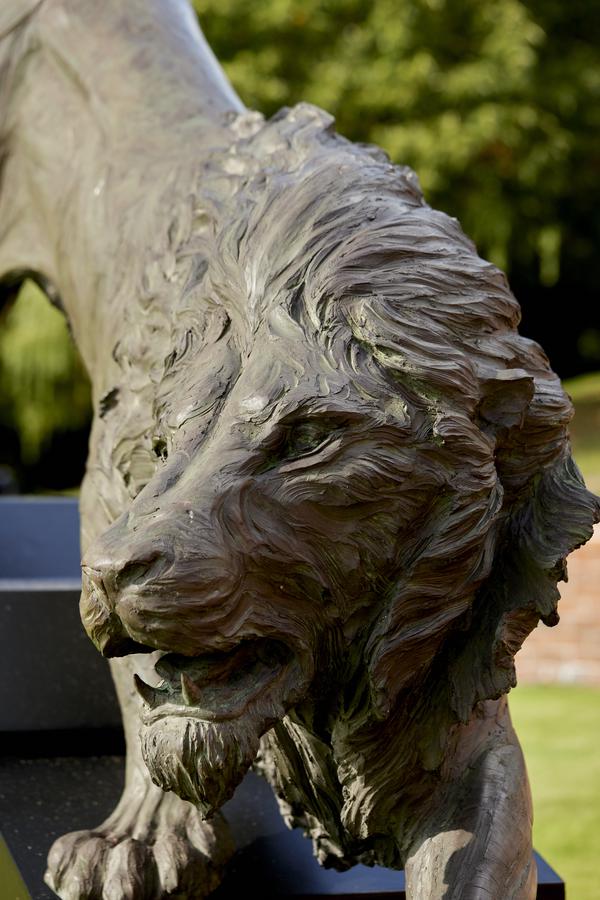 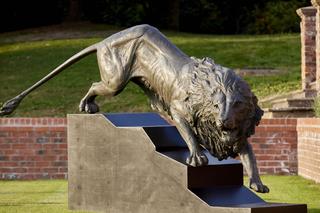 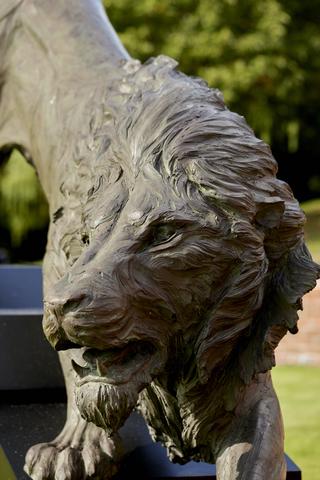 Charlie Langton
b. 1983
Fear Descends
Bronze resin
Length: 297cm, Width: 116cm, Height: 180cm
This resin version of Fear Descends exhibited in The Sculpture Garden at Carden Park Hotel is not for sale.
The bronze version from an edition of 6 is available for £225,000

In Fear Descends, Langton has sculpted a hungry and desperate Lion descending from his rock, having spotted his prey. The Lion represents Fear which resides in all of us and paralyses positive action and thoughts. Langton sees the antidote to this as Faith, which here is represented by the viewer.

Lockdown has given Langton the chance to express creative and innovative ideas in his sculpture. He has been concentrating on the idea of Faith over Fear which he explores in a series of three bronzes. He sees Faith, not in a religious sense, but in the idea of the core humanity and goodness in people. ‘This pandemic has created awful situations for millions but it also has shown people and communities at their very best. I hope this is something that we hold onto.’

Langton expresses the intensity of feeling in the sculpture. The brooding power of the animal and contained energy are visible in the vigorous, sinuous lines of pure potency shown in the muscle and skeleton of the animal. The emotion of fear creeps towards us and grows as the animal symbolically comes prowling nearer, stifling and overpowering, indicating the effect of constantly living with this emotion and how hard it is to keep it at bay. This symbolism may be seen in terms of the individual but also the collective, as society becomes aware of, and understanding of, the Anthropocene and its effects. Bravery, faith and determination are needed to combat the effects of Fear and in this sculpture a new romanticism is evident in Langton’s work which has the vivacity and power of Delacroix’s Lion Hunt and Landseer’s Lion Defending its Prey.

Langton’s passion for art and sculpture began at school where he was awarded an art travel scholarship which he spent at the renowned Charles Cecil Studios in Florence, learning the skills of portraiture and acute observation. Pivotal to his development as a sculptor, this taught him the skills of line, contour and modelling. Langton applies these techniques to his animal portraits in bronze, emphasising the unique grace and individuality of each animal. He states the influence of Rembrandt Bugatti, a sculptor whose work he sees as encapsulating something pure and natural within the animal. Similarly, Langton captures the attributes of each animal, sculpting the ‘character, the presence, the movement and the likeness … so that fleeting spark of excitement, passion and beauty can endure.’

A great deal of background work goes into Langton’s sculptures starting with the understanding of the anatomy and placement of muscle masses in the subject, detailed measurements and observation from life of the animal’s individual characteristics and character. All of this then informs his creation of a maquette for the eventual sculpture. He spends four to five months sizing-up the figure and modelling it in the desired size (usually life-size or larger) in clay. It is then cast in bronze, in precise sections and re-assembled, welded and chased.

Langton has always been surrounded by horses and they are a natural subject for him. From an early age, Langton knew that he would always end up sculpting horses. He stated: ‘I find horses fascinating to look at. They are a balance of power and beauty. Their physical make-up is quite extraordinary and they are inspiring to watch. I used to doodle horses the whole time. I wasn’t a massive fan of riding, it was all about observing the horses and drawing them. I remember doing my first full oil painting of a horse when I was 11 or 12. I enjoyed the structure of the cheekbone and then trying to get the warmth into the eyes. They are not easy to draw but once you get it right you know because it all seems to click. Their physical structure is a challenge – horses are this amazing combination of speed, power and delicacy.’

Langton looks for and is attuned to the difference between horses – the thing that sets them apart – whilst suggesting the speed, power and drama experienced at the races. Because of this Langton is well known in the racing world and has been given high-profile commissions. He is recognised for his life-size sculptures of great racing thoroughbreds such as Kauto Star, Giant’s Causeway, Goldikova, Yeats and others at racecourses and studs, and his work has been exhibited at London’s Sladmore Gallery and the Rountree Tryon. In collaboration with Asprey, Langton created the silver Derby and Oaks Perpetual trophies for the Epsom festival. He worked with sculptor Mark Jackson on the Parachute Regiment and Airborne Forces Memorial at the National Memorial Arboretum in Staffordshire of Bellerophon mounted on winged Pegasus, juxtaposed with a paratrooper pulling in his bergen. For HM The Queen’s 90th birthday, Newmarket commissioned Langton to make a monumental bronze of the monarch (sculpted by Etienne Millner), with the mare, Highclere, and a foal. The resulting piece can be seen on Birdcage Walk, Newmarket, and shows an extraordinary connection between the three figures.