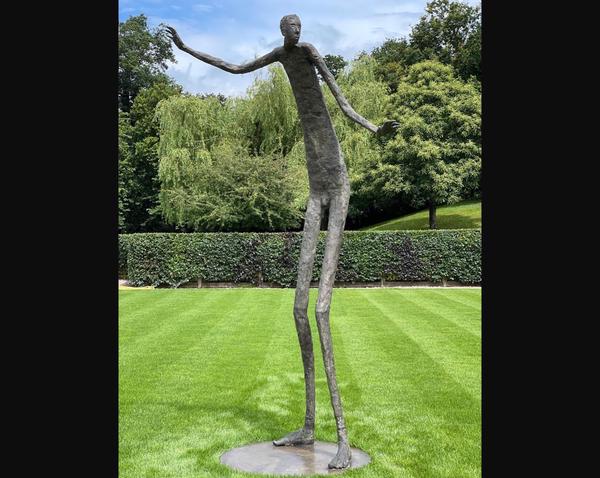 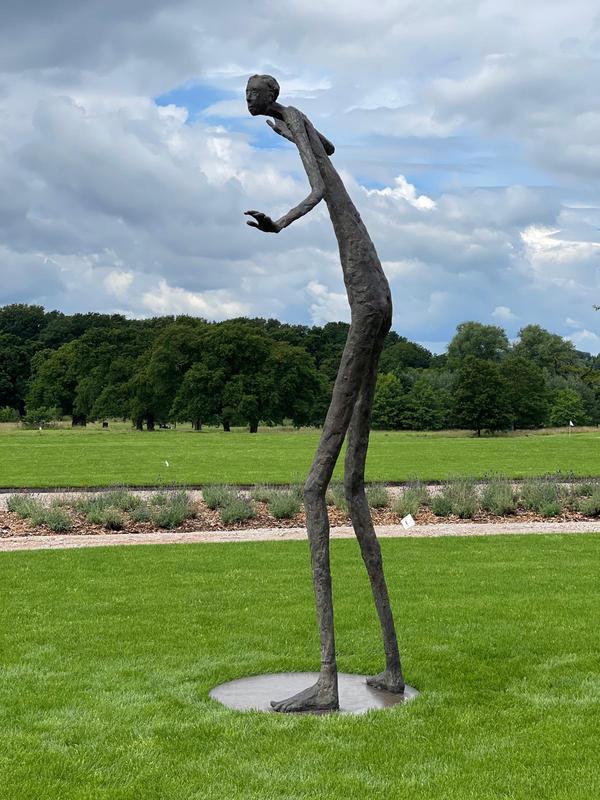 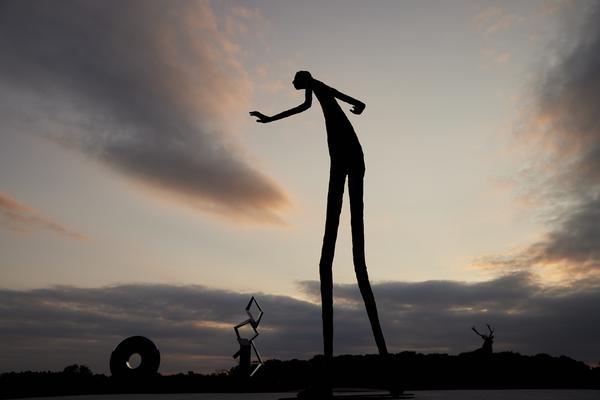 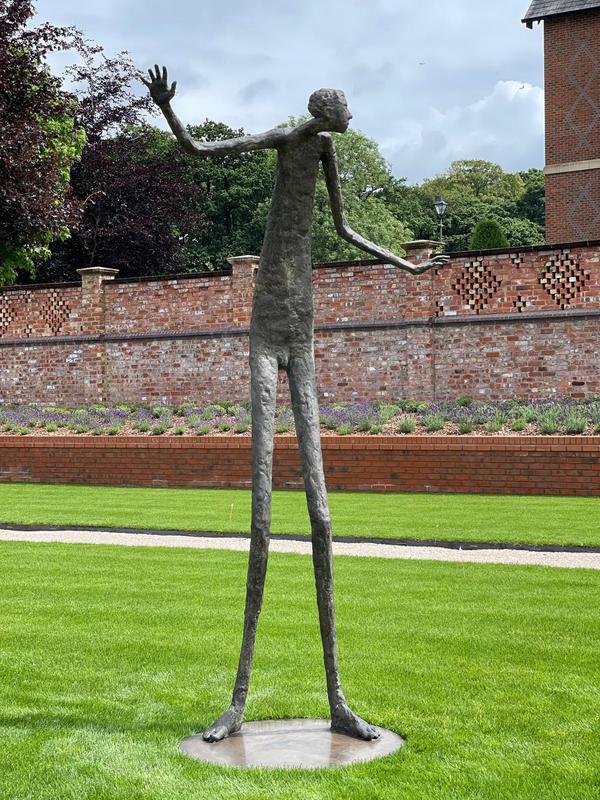 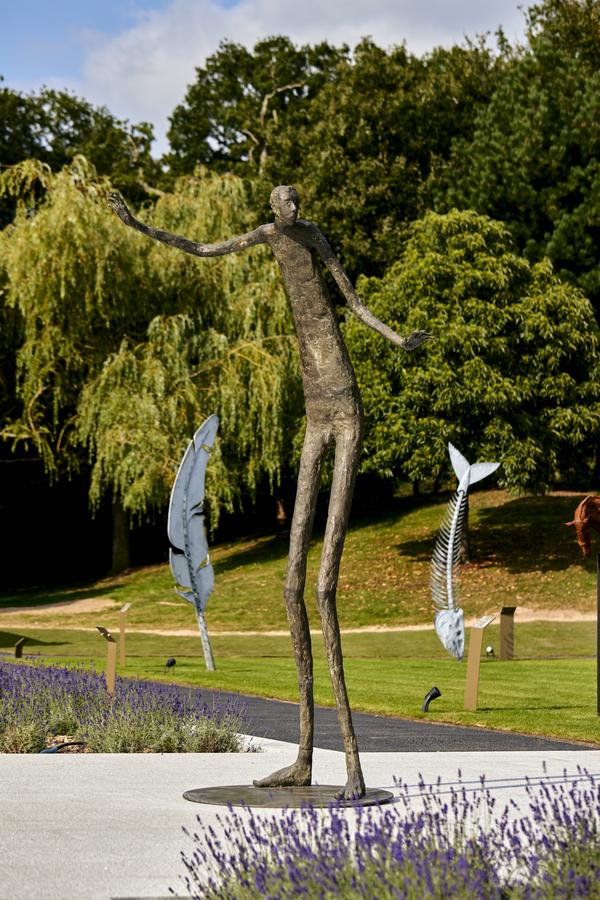 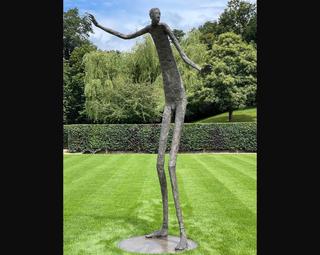 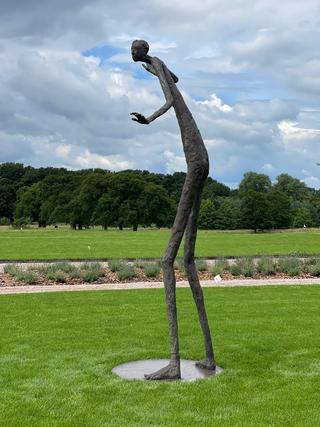 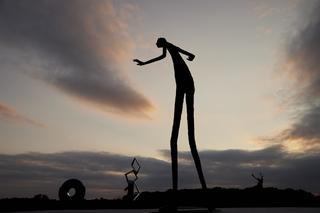 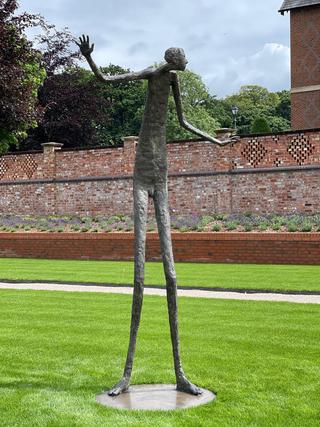 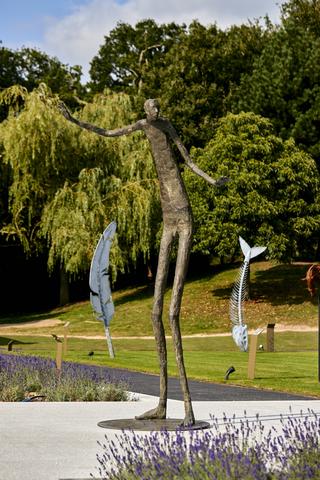 Looking at Life forms part of a series of iconic works by Gillespie in which through his search for a deeper understanding of the human condition, he explores man in a pensive state of mind. Other notable examples from this series can be found in Liechtenstein and Holland. They are crafted as gaunt, elongated, contemplative figures who peer towards indistinct horizons. Gillespie refers to these works as his ‘looking’ sculptures and describes them as ‘dreamers looking into the unknown’. Quiet and stillness, poise and balance, are the qualities which underlie these sensitively constructed, semi-abstract works. Heads are averted, gazing out to a fixed point in the distance whether upwards into space, as with Looking to the Moon, or out to the horizon as with Looking Together. Reaching heights of well over two meters, Gillespie’s focus is on conveying the monumental presence of these figures which tower above us. Their torsos are reduced to their bare essentials so only the basic shape of the human form remains, yet their stance and the detail of expression in their facial features communicates figures in deep thought, pondering the large, unanswerable existential questions of the universe.

The genesis for the ‘looking’ series came in part, as a reaction to a period of intense figurative work on his commemoration of James Joyce, Ripples of Ulysses, in 2000. In the aftermath, Gillespie wanted to produce a more conceptual work that, whilst still figurative, distilled the lines and shapes into their most simplistic form. He has cited Dublinʼs monumental ʻSpireʼ as his inspiration for the ultimate sculptural shape. Two verticals from the original armature for Joyce were his starting point to achieve this and over the next couple of years he created Looking at the Moon and Looking to Sea and Awe through a manipulation of the same armature. This theme would be revisited and re-worked over the years, most recently in Looking at Life.

Gillespie’s work is deeply personal. He models, moulds, casts and finishes each sculpture with his own hand, passionately engaging with the mindset of the figure he is seeking to convey. Looking at Life is a soaring solitary figure, roughly textured and gnarled betraying his exposure to the emotional tumult life brings. His feet firmly root his emaciated and frail body to the ground; buffeted by life, he balances unsteadily, peering forward, deep in thought, bent, with hands stretched, gently but urgently seeking, sensing a way to advance. This is an intimate work, emotionally rooted in his wife Hanne’s terminal illness which came to its close in 2020. The idea of life itself therefore is significant to Gillespie – Hanne was on borrowed time but ultimately we all are. The figure symbolizes human fragility and humility in the face of the perplexing, mysterious and often troubling complexities of life, as well as the determination to confront such questions and to endure.

Rowan Gillespie was born in Dublin in 1953 to Irish parents and spent his childhood in Cyprus until he was ten when his family relocated to York. He trained at York School of Art, Kingston College of Art and Handverke Skole, Oslo, remaining in Norway with his wife Hanne till 1977, when they returned to Ireland.

Gillespie works mainly in bronze and creates his sculptures from conception to the finished work in his own one-man foundry. Influenced by Henry Moore whom he met whilst at Kingston and by the art of Edvard Munch, Gillespie’s bronze sculptures are preoccupied with human emotions. He draws from a variety of sources, including classical heroes, embryonic forms and dancing couples; each work telling its own story.

Gillespie has been hailed as one of Ireland’s greatest figurative sculptors and has exhibited regularly in Europe and the United States, but since 1989, has concentrated on site-specific public commissions. He is best known for ‘The Famine Trilogy’ commemorating the Irish Famine of 1845. The component sculptures from this series are on display in Dublin, Toronto and Tasmania. Other notable public works are found in Ireland, the United States and Canada and his work is represented in The Irish Museum of Modern Art.