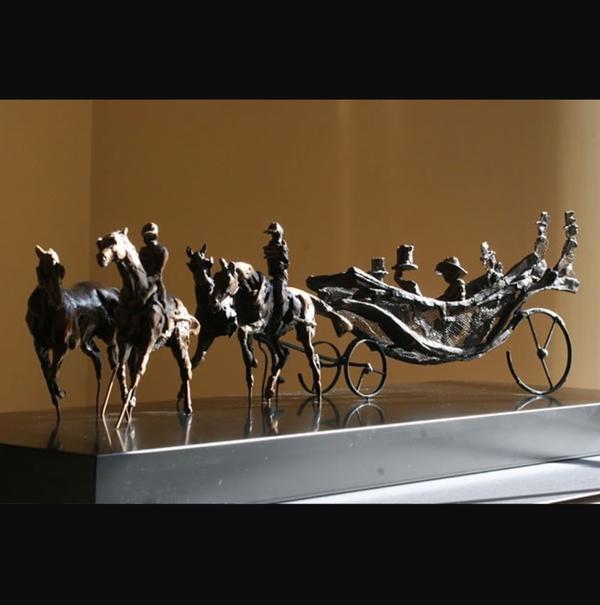 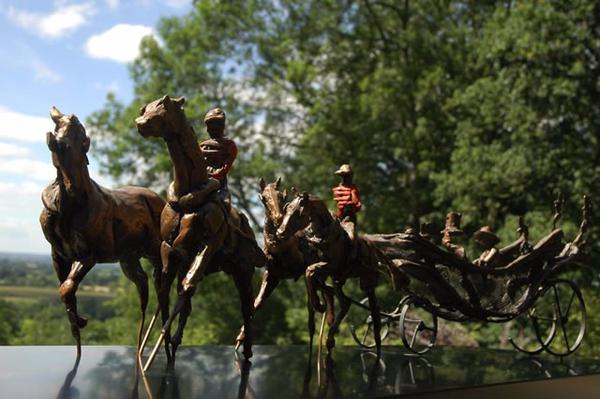 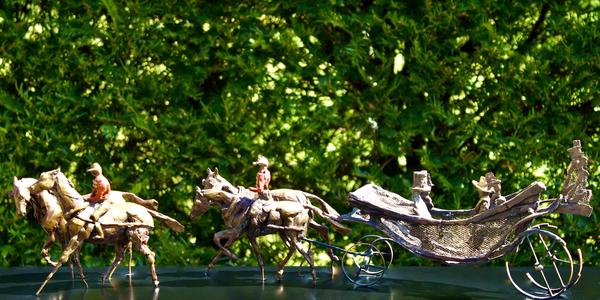 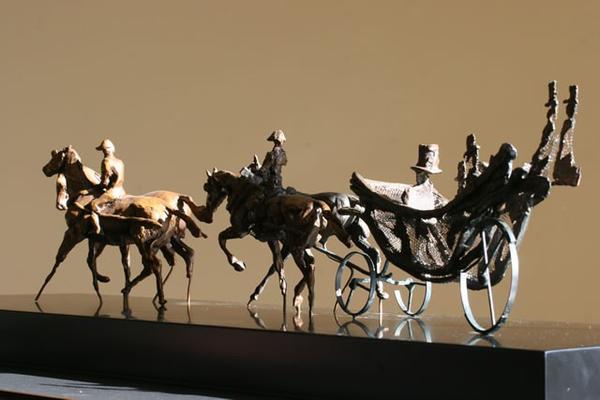 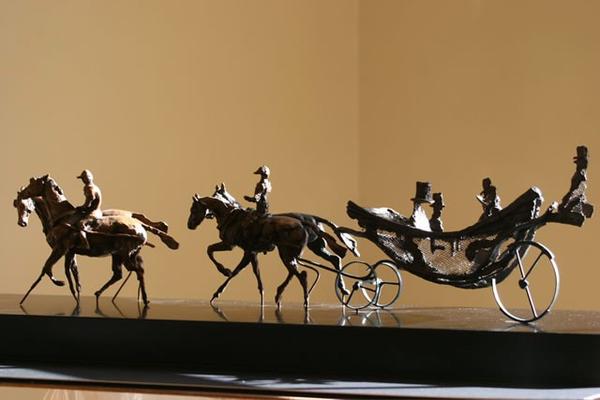 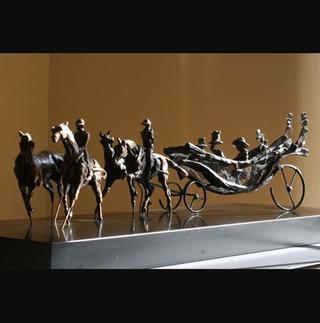 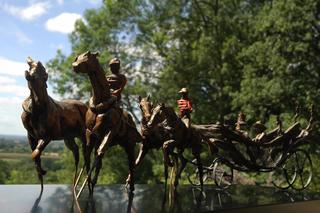 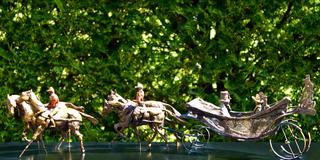 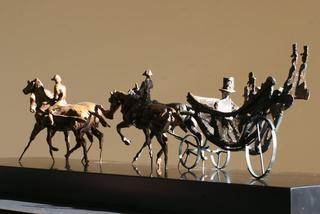 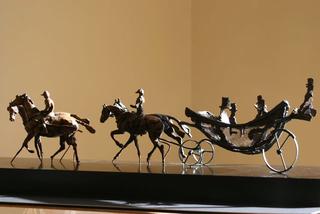 The contemporary bronze, stainless steel and mesh maquette sculpture of the Royal Procession encapsulates the essence and traditions of a unique, pervasive, annual event enshrined in our psyches and synonymous with Royal Ascot. A collaboration between two artists, Tessa Campbell Fraser FRSS and Judy Boyt MA FRSS, it depicts four figures of the royal party, three top-hatted males and a hatted female, The Queen, who travel in an open-top Landau carriage pulled by four trotting horses; two red-jacketed figures (the only note of colour) sit astride two of the horses and two top-hatted footmen sit, high, silhouetted at the back of the carriage.

Both sculptors have a passion for the natural, animal world and this is evident in the brindled, organic surface of the horses’ bodies, and the sense of their rhythmical, graceful movement, as their legs stretch out elegantly or tuck up under their bodies; their heads face in different directions giving each animal a living essence and individuality, whilst they inextricably work in harmony pulling the carriage. The negative space created between the two front horses is animated by the heads which curve towards each other. We can almost hear the jingle of the bridles and the wheels spinning (so fast that we cannot see the spokes) as they trot along.

The delicacy of the mesh which makes up the body of the Landau gives a suggestion of the play of sunlight and shadows, a timeless but transient moment and an enduring, whimsical image that we have seen many times and which is immediately recognisable. It suggests a nostalgia for unchanging, but illusory and imagined, splendour and beauty – an ageless, classic, perennial moment.

The Royal Procession is the traditional appetiser for Royal Ascot when the public sees The Queen and other members of the Royal Family, and it has been a tradition since 1825 when King George IV led the Royal party up the Straight Mile in front of the crowds. A diarist of the day commented, ‘the whole thing looked very splendid’. The pomp and ceremony of the Royal Procession remains one of the most popular traditions of the distinctive institution of Royal Ascot. The two artists bring together this ongoing history in a contemporary interpretation. They incorporate a striking combination of bronze, steel and mesh to illustrate the time-honoured tradition, giving a fragmented, delicate carriage and partial figures which suggest a hazy, dream-like, sun and shade-dappled image of the Sovereign in a transient, changing society.

Judy Boyt has produced a wide range of sculpture which is housed in royal palaces, public parks and private homes. This includes Rebellion – a twice-life-size rearing horse which was unveiled in Trafalgar Square and which now sits on top of East India House in the City of London, and for which Boyt was awarded The Royal British Sculptors (RBS) Medal; Evocation of Speed, sited in Epsom which celebrates the famous Derby; Golden Miller at Cheltenham; Up to the Line at Windsor; Waiting in Liverpool and the Mitsubishi Badminton Horse Trials trophy. Her work is in the collection of HM The Queen, Sheikh Hamdan al Maktoum, the Sultan of Brunei, The Royal Naval College, Dartmouth and The National Horse Racing Museum in Japan.

Tessa Campbell-Fraser (b. 1967) grew up in the Scottish Borders and the affinity that she felt for her surroundings and the influence of the natural world and animal life there, is apparent in her work today. In her bronzes of animals, she primarily creates a striking likeness to the animal, allowing the beauty, natural form and dignity of the subject to speak for itself. Inspired by life, movement and atmosphere, she seeks to imbue each work of art with the essence of the animal. She states, ‘I can do portraits of people but … the thing about people is they have a firm view of who they are, how they should look, whereas animals don’t have that. And spending time with an animal is different – it’s a period of complete peace.’

Campbell-Fraser trained at the Chelsea School of Art and began her career as a painter, but in 1996 she ‘fell into’ sculpture accidentally, realising that it was where her main interest lay. She recalls, ‘When I was twenty-three, the Queen commissioned me to paint her and her dogs. I was very nervous … I took two cameras and shot rolls of film to develop, but then one of the cameras jammed and we couldn’t get the roll out. I’d got pictures of the Queen with some of her dogs but not all of them together – there were some in one shot but not another and sadly one of the dogs died before I could get down to paint it from life. So, I modelled them in miniature with modelling wax. I realised then that I loved it – I loved the strength of forms. It feels more free than painting. With sculpting, you have to see things in the round. I love painting and drawing, but I find sculpting more natural.’

One of Campbell-Fraser’s great passions is equestrian subjects, and she has been commissioned by many notables including the Queen and Prince Fahd of Saudi Arabia (owner of Derby hero Generous) to sculpt and paint their horses. She painted Shirley Heights, the Queen’s Derby winner and her larger-than-life size 2016 bronze of the Queen’s winning horse Estimate is especially well regarded by the Queen, who took great interest in all aspects of the creation of the sculpture.

In 2001 Campbell-Fraser was elected an Associate Member of the Royal British Society of Sculptors and became a Fellow in 2004. She has won many awards and exhibited her work at a variety of prestigious places including the Royal Academy Summer Show, Sculpture at Goodwood, the Royal College of Art and a solo show at the Natural History Museum.

Her bronzes are held in private collections including those of Her Majesty the Queen, Sir Jackie Stewart, HRH Prince Fahd Salman, the Household Cavalry and Knuthenborg Safari Park, Denmark. She works and teaches in Oxfordshire.