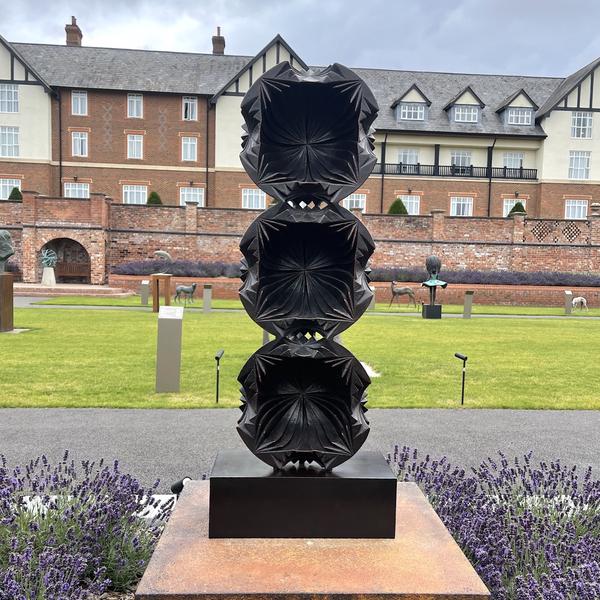 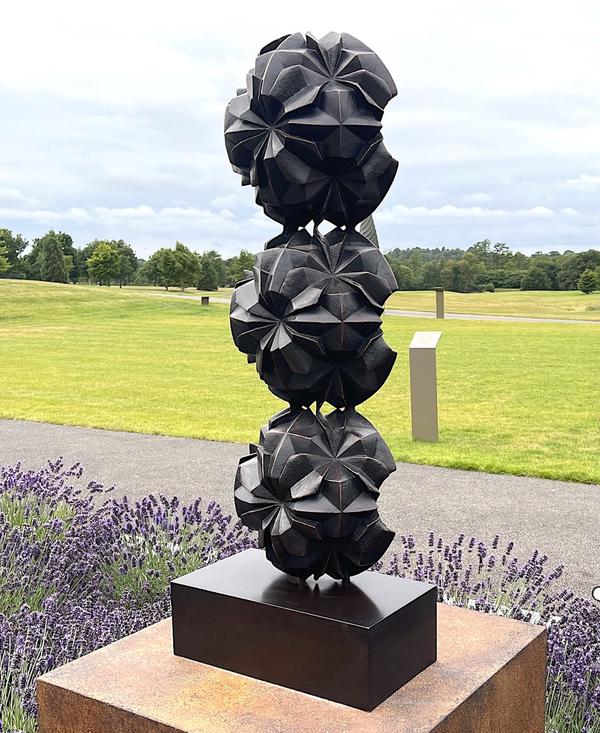 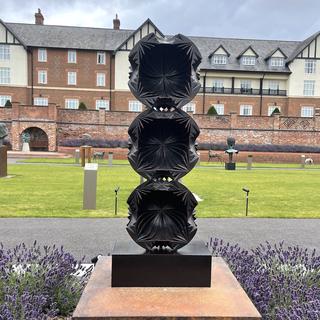 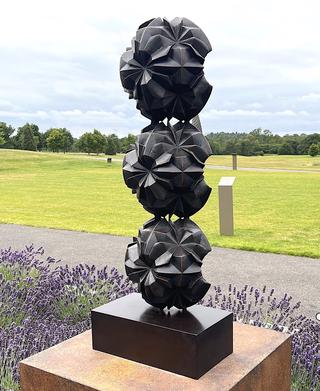 In Crystalline Tower three round forms, perfect in their geometry, rest on top of one another. One side maintains its rounded form, carved with an interlinking pattern of roundels which seem to unfold and work with each other; while the reverse, seems to open up to reveal the depths within the sculpture in an exquisitely-shaped, deeply-carved flower-like opening. Every stylised petal is flawlessly carved to fit into and form a square inside the circle of the overall form. The original concept and idea stems from a desert rose, its intricate rose-like formation of crystal clusters of gypsum or baryte, which include abundant sand grains. a Desert Rose, which was visually fascinating for Cassell, in the way the precise geometrical facets were formed through nature from a combination of water, wind, and sand.

Crystalline Tower is solid and firm, but tactile and reassuring in its immaculate geometry. The dark heavy bronze becomes seemingly weightless as every faceted angle and carved segment catches the light, highlighting different aspects so that the light and shadow add extra depth and heightened light to the deep carving. As with all Cassell’s work, the sculpture is open to interpretation by the audience and suggestive of symbolism; in this case the work is redolent of a totem pole; totemic god with head, body and legs; or giant linking atoms about to spiral out into the atmosphere.

Cassell was born in Pakistan, brought up in Lancashire and now lives in Shropshire. She obtained an art-based degree in 1997 and an MA in 2002 and became self-employed in 2004. Growing up, Cassell always loved maths and problem solving and this is evident in her work as she maps flat, geometrical designs onto curvilinear surfaces giving it shape and mass. Cassell’s work utilises definite lines and dramatic angles to manifest the universal language of number and create a dynamic sense of movement. To achieve these effects she uses thick, heavy surfaces or solid forms to carve to the desired depth. Cassell concentrates on simple forms as the basis of her work which maximises the impact of the complex surface patterns in combination with heavily contrasting contours, and she creates depth through both carving and the effect of light and shadow.

Cassell’s multi-cultural background directs her work which displays her love of recurrent patterns and strong geometric elements inspired by the repetitive motifs found in Islamic architecture and North African surface design. Her work has distinctive and vibrant links with nature – from the strong pattern of the petals of a sunflower or lotus and the fractiles of a snowflake. Growing up in Manchester, Cassell was fascinated by the architecture of the city, with the hand-carved facets on buildings which collect rainwater and shadows. Other elements influence Cassell’s work: she spent four pivotal months in Italy which introduced stone into her work and she spent time in Japan working in clay which gave her a new element of control and an appreciation for distorted forms which loosened her understanding of design.

Cassell learnt to carve with both hands and she finds that this physical approach helps her connect with her work and create perfect geometry as she creates the compelling drama and playful dynamism that characterises her work. While she designs her pieces she connects to her subconscious and then enters a kind of therapeutic, dream-state while she carves.

‘These all-embracing obsessions of bringing into being the poetry of faceted forms are her creations. They are buried in layers of forgotten history, like subcutaneous memories waiting to be plumbed; like the ocean deep they float in darkness waiting to be revealed by the light. Halima carves out parts of her history, an exorcism of thought forms, a compulsion to make manifest the intangible, transmuting it into something hard and permanent. Like life, everything begins with the energy of a thought.’ (David Coggins)

Cassell’s works are held in many public collections in the UK including the Victoria and Albert Museum and the Birmingham Museum and Art Gallery.