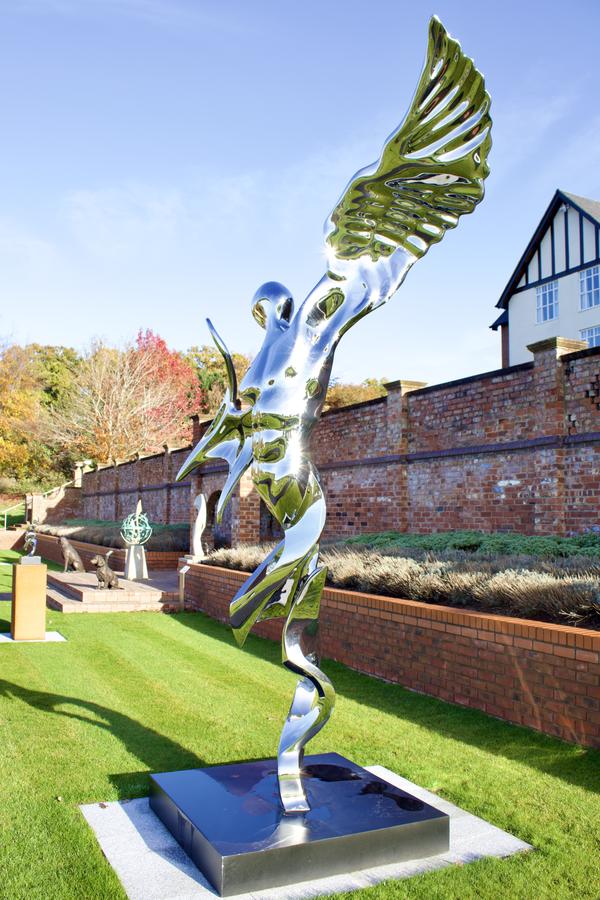 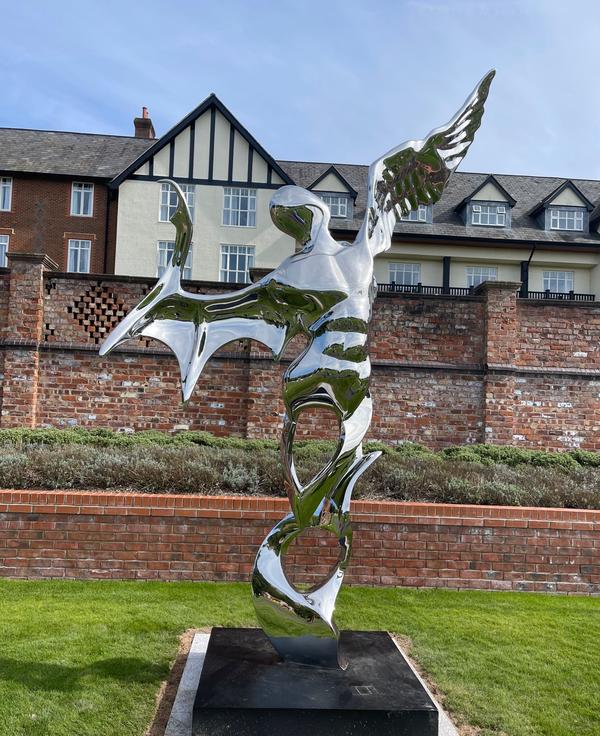 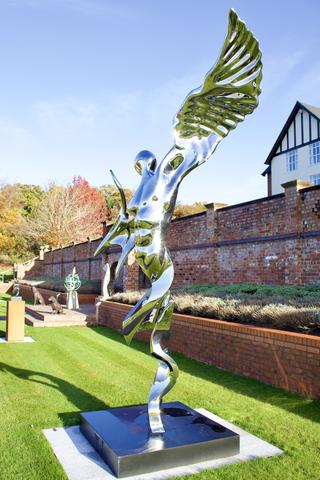 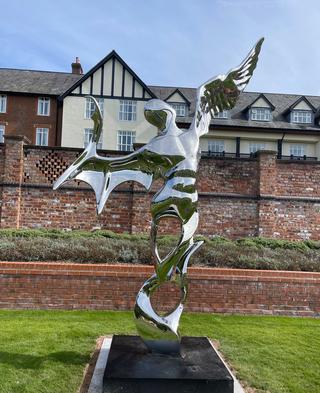 Dilemma of Man II depicts a lissom, elegant human figure which has a pair of wings instead of arms. It is recognisable as a human figure but there is an amorphous, liquid quality to the sculpture as the form seems to melt and morph into the wings. The wings are raised and float and soar as if in a dance; the torso twists in a melodious contrapposto form and the sinuous shape of the pierced lower part of the statue enhances the sense of uplift and movement within the sculpture. The lower part appears almost semi-transparent as if it rises in swirling vapour from the ground like a djinn who is only part visible to the eye. The reflections on the stainless steel statue are like reflections on water – limpid and graceful. The sculpture combines the dynamism of a Boccioni sculpture with the elegance and grace of the Winged Victory of Samothrace.

Dilemma of Man II is a portrayal of the eternal struggle between good and evil. One wing is the wing of an angel, beautifully feathered and raised towards the sky; the other wing is bat-like – with connotations of the devil - with three sharp points, lowered so that two points face downwards. The work is a metaphor for the devil on one shoulder, the angel on the other: the conflict of day-to-day choices between good and evil that a person must make. For Akhavanjam, the figure represents influential members of society who must make choices and whose decisions effect and impact the rest of humanity. The figure must face this and choose what is easy and wrong or what is hard, selfless and good. The pointed devil’s wing is lowered and one spike rests just in front of the face of the figure - temptation is never far away. From certain angles, the devil’s wing offers the suggestion of a bow with arrow about to be released, as if the figure is an archer engaged in a mystical battle fighting off evil in favour of good as the figure rises into the sky.

The uplift of the angel’s wing suggests a lightness of touch – a reaching and striving upwards, it is light and lithe whilst at the same time we appreciate the heaviness of the material from which it is formed. The line of the statue follows the leg on which the figure rests, stretching upwards and reaching to the tip of the angel’s wing. It is a sign of hope and insight as if the statue is being pulled skywards by an invisible force – as if the decision towards goodness has already been made.

Akhavanjam was born in Tehran, Iran and was sent to boarding school in Marburg, Germany when he was fourteen. Alongside his studies at high school, he attended a sculpture class which ignited his loved of sculpture. In 1989, Akhavanjam moved to the United States to attend the George Washington University where he gained a degree in Biology in 1995 and subsequently in 2005 he received an Executive MBA degree from Kempten University of Applied Science in Germany. From 1997 to 2011 Akhavanjam managed the Design Department of his family’s Iranian manufacturing company for household appliances. This gave him an in-depth understanding of the manufacturing process and a passion for the structure and materiality of objects, and in particular a rapport with stainless steel. This knowledge of the scientific properties of metal combined with his love of sculpture led him to establish his own sculpture workshop. In his work he balances the inherent strength of the material with the delicacy of the cast form, realising a creative alchemy between the two. He created his first bronze sculpture in 2011.

Akhavanjam uses the unforgiving and technically challenging medium of stainless steel and bronze which under his hand seems to melt or morph into shape. His works are both figurative and abstract and sometimes combine both in their composition. He is inspired by contrasting life forces and energies which seem to grapple with each other, held within the calm beauty, elegance and sleek finish of the polished surface. His sculptures are a commentary on society and deal with paradoxical and complex themes such as the duality of good and evil, the power of the mind over brute force and the constant struggle to create a balanced and harmonious existence.

Akhavanjam has exhibited his work widely in Iran and the UAE and has participated in exhibitions at Palazzo Bembo, Palazzo Mora and the Giardini della Marinaressa in the context of the Venice Biennale in 2017, 2019, and 2022 (where his works remain on display until November 2022). Recent exhibitions in the UK include 2021 ANTHEM, Tremenheere Sculpture Gardens, Cornwall; Cotswold Sculpture Park, Cirencester; 2022 Dodington Hall, Lincolnshire and Cromwell Place, London.

Akhavanjam is now a Greek resident and divides his time between Greece and the United Kingdom.